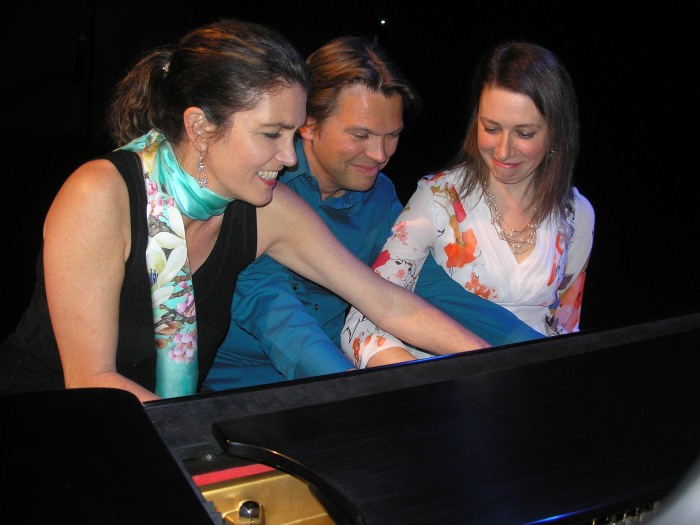 In spite of the concert being on a Monday night in April, spirits were not dampened! The recently formed quintet comprised of members from 13-20 years of age called “Appassionato,” owned the stage with their enthusiastic version of a Schumann piano quintet.The pianist Henry Baker provided a stable and virtuosic line throughout the composition. There was an effective dialogue between Anton Baker’s viola part and thirteen year old Adam Kunyk’s cello part. Emily Kunyk and Emily Baker provided rock solid solidity in the tempo on their respective violins. I would like to hear this group present a whole concert; their sound was rich and warm.

Marcel and Elizabeth Bergmann and Sarah Hagen showed both their versatility and virtuosity throughout this concert which featured music for left hand alone by Marcel Bergmann and music for two to six hands- all on one piano! The pieces for six hands required some very creative seating arrangements – needless to say!

The Prelude for one hand (2019) by Marcel Bergmann began with random bell tone chords. Then a constant ostinato (repeated rhythmic and melodic pattern) was added in the middle giving the effect of two hands playing! Sarah Hagen took the stage to represent two hands playing. She masterfully played three Rachmaninoff Preludes ( #6,7,8 ) from his Opus 32. Each had a varying character: #6 was “stormy” and restless; #7 was like a Russian “Sesame Street” (in Sarah’s words); #8 was effervescent. All were difficult but well played.

The avant garde “Hippocratic Oath” by Mauricio Kagel (1931-2008) – an Argentinian-German composer who developed a theatrical style in his music – was actually written for three hands. One of the hands slapped the bottom of the keyboard in an irregular rhythm at the beginning as if to be independent of the others. The piece ended, however, with all hands stacked together in the air as if to show unity.

After such a piece, the lightness and charm of some of Brahms Waltzes, played in duet form, gave the program a nice turn of events. This breath of fresh air continued with five hands playing Australian-U.S. composer Percy Grainger’s (1882-1961) Zanzibar Boat Song. The music was rich and tune filled; bringing up visions of a brisk sailing trip on a bright sunny day.
Chicago concert pianist-composer Andy Costello (b.1987) is a champion of the music of living composers. His piece “Balance” involved players leaving and returning to the piano to add their voice to the mix.At the climax of this piece, six hands were used (along with creative seating arrangements) to use most of the piano keyboard and create a dense blanket of sound. A rollicking arrangement of Rossini’s “Barber of Seville” by Henri Hausser ended the first half of the programme.

After the intermission,Sarah Hagen played a Piano Sonata in A major by Marianne von Martinez (1744-1812). She was an Austrian composer greatly influenced by the people she shared a house with. In the house (Michaelerplatz), which had four floors, lived a princess from the Esterhazy family; Nicola Porpora – a singing teacher; The Martines family; and in the cold leaky attic, Joseph Haydn. Their lives ultimately became connected through their involvement with Marianna (Porpora taught her voice; Haydn was the accompanist etc). Marianna was the only woman to have written a symphony during the Classic Period. Her Sonata #3 is very much in the style of Haydn and Mozart, with two fast movements divided by a beautiful melancholic Andante movement.

The programme continued with a duet version of three selections from Bernstein’s “West Side Story” with special attention to the haunting “One Hand, One Heart” being the favourite for this reviewer. “ Libertango” by Argentinian composer Astor Piazolla (1921-1992) with it’s infectious rhythms played by four hands; “Romance and Waltz” by Rachmaninoff (1873-1943) using six hands; and the “Radetzky March” by Strauss-also with six hands- were much appreciated by the audience. A hilarious encore which left Marcel Bergmann without a piano part; and resigned to sing like a dejected Cuckoo, with the ladies at the piano; topped off a wonderful evening.

The next NOCCA concert will feature Vox Humana Chamber Choir from Victoria, BC presenting a versatile mix from established to newly commissioned choral repertoire on Saturday April 27, 2019 at 7:30 pm. More info at nocca.ca.

Review by Jim Leonard for the Vernon Morning Star.