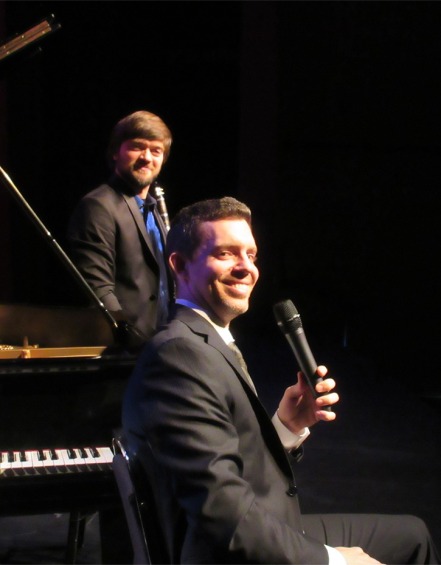 The North Okanagan Community Concert audience was treated to an evening of unadulterated excellence by the Wolak Donnelly Duo Sunday.

The two musical showmen had us eating from their hands, from Kornel Wolak’s first explosion on to the stage, with his clarinet slithering through the opening notes of George Gershwin’s Rhapsody in Blue and, soon afterwards, Chris Donnelly’s discreet walk to the piano to join him, precisely on cue.

After they’d bent and moulded the dots to their own unique style and even gleaned applause before the end of Gershwin’s masterpiece, they played a medley from his Porgy and Bess.

We could feel the lazy haze during their rendition of Summertime, and when Wolak played I Loves You Porgy and Bess, You Is My Woman Now with the profound passion demanded of true, lasting love, Donnelly’s accompaniment matched it sublimely.

Wolak admitted, “We played it lovely.” He went on to announce that the duo had covered their gamut of interpretations, and, as a result, the concert was over. He topped our laughter by saying, “But we’ll play the rest of the program to fulfill our contractual obligations.”

The rest of their program did much more than that.

We were on first name terms in no time and primed for more laughs. Chris played his composition about his nightmarish gig at the Edmonton club of a bankrupt called Henry. Kornel told of their Kaslo billet the previous night, when he’d asked their host how many cats he’d lost to coyotes. The casual reply was, “We get through two a year.”

There were also serious moments of great beauty.

For instance, when the two paid homage to Mozart with the Adagio from his Clarinet Concerto in A Major the audience sat, hushed, and finally breathed a collective sigh before letting rip with applause.

And they watched in awe when Kornel played the entire Prelude from Bach’s Cello Suite No. 1, adapted for clarinet, without taking a breath.

We learned about, and practised his circular breathing technique during the duo’s question and answer session in the second half of the program.

But not before we’d been treated to a second contribution by Bach; this time, the Allegro from his Violin Sonata No. 3, played brilliantly on clarinet by Kornel and accompanied spectacularly, on spoons, by Chris. First, they playfully tuned the spoons to the clarinet to enhance this unique experience.

We’d already tasted Chris’ percussive expertise, as well as his clowning ability, when he’d augmented his left hand on piano with maracas in his right, to accompany Kornel’s race through Zequinha de Abreu’s Tico-Tico no Fubá (Swallow in the Corn Meal) made famous by Carmen Miranda in the 1947 movie Copacabana. When the pace grew to fever pitch, Chris threw the maracas over his shoulder and used both hands on the keyboard.

He too had his hour of glory, when he played Hymn to Freedom written by Oscar Peterson to support the Civil Rights movement in 1962.

Wolak and Donnelly topped the evening with their interpretation of Rossini’s Introduction, Theme and Variations. It earned them a spontaneous standing ovation and us the encore: Flight of the Bumblebee.

– Christine Pilgrim is a freelance writer who reviews the North Okanagan Community concert season for The Morning Star.