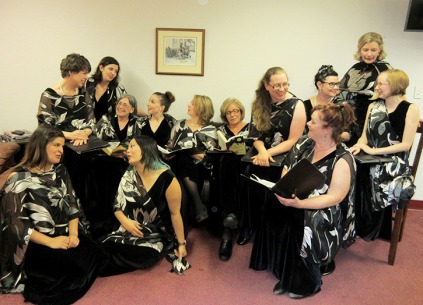 Members of the Elektra Women’s Choir relax in the green room at the Performing Arts Centre before their concert Saturday, May 23.— Image Credit: Submitted

They were joined for their final piece, David MacIntyre’s Ave Maria, by Ancora, an Armstrong women’s choir led by Terry Logan. Together, they sang a well-earned encore from the auditorium aisles before filing into the lobby to mingle with the audience, thus providing an opportunity to discuss favourite pieces.

Mine was Jerusalem, a traditional Irish folk song arranged by Michael McGlynn, which Elektra also sang from the auditorium aisles. Choir member Grace Groot (first alto) allowed me to peep at her “dots” (a less elevated term for musical manuscript). They showed the song’s haunting, cacophonous refrain inscribed as a round, where singers could join in at whatever point and in whatever rhythm they chose. The sound of anguished yearning that resulted from this random beginning and ending left the audience hushed in a state of awe.

Soloists Danica Kell, Holly Kennedy, Malaika Horswill and Stephanie Schollen were equally effective. Meanwhile, Morna Edmundson stood silently still, listening; a solitary figure on stage, both hands folded before her. She only raised them to conduct the opening of the refrain: “Jerusalem, our happy home, when shall we come to thee? When shall our sorrows have an end?” Elektra-fying!

My second favourite was another traditional song, Russian this time, entitled Ne po pogrebu Bochonochek Kataetsja. Arranged by Kitka, it made an imaginative vehicle for the choristers’ arrival on stage. Instead of dribbling on as is often the case when risers have to be negotiated, they flowed in separate sections and took circuitous routes to arrive at interesting groupings. Their singing was faultless, with pure harmonies and sonorous tones. The marriage between soloists, chorus and percussion in this playful love song bewitched and elevated the spirit.

Da Pacem (Peace) was beautiful too. So was Northern Lights (aurora borealis, which inspired young Norwegian composer Ola Gjeilo to set to music the Pulchra es amica mea text from the Song of Solomon).  Like Da Pacem, it was sung in Latin. An English translation, along with words to every song performed, could be found in the extensive program notes.

A must-mention: when Edmundson called for the house lights to be turned up, they didn’t shine quite brightly enough for everyone to see the finely printed program, contrary to the opinion of someone presumably blessed with 20:49 vision. After a brief word with a helpful usher at intermission, the lights were adjusted to rectify the situation. Bouquets to both usher and lighting technician!

The evening’s favourites also included the curtain raiser, played masterfully by 16-year-old Jaeden Izik-Dzurko. Chopin would surely have delighted in this accomplished young pianist’s interpretation of his Barcarolle Opus 60.

The only male on stage with the 45 female choristers, Dr. Stephen Smith, also deserved applause for his impeccable accompaniment on piano and percussion.

But the last word must remain with those choristers. I confess to a prejudice in favour of the resonant tones of the male voice but their absence paled to insignificance once Elektra began to sing. As NOCCA president Paul Maynes noted, the glory of the human voice raised in song is unmatched. I’d add: of either gender.