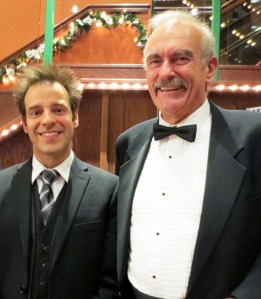 By CHRISTINE PILGRIM for The Vernon Morning Star.

Les Violons du Roy, its name adapted from that of the string orchestra that played for a 17th century French king, awed Tuesday’s North Okanagan Community Concert Association’s gala audience with music fit for any king, or queen for that matter.

One young man said afterwards, “This review should be easy to write. One word: wow!” That sentiment was confirmed by NOCCA president Paul Maynes, who overheard the same expletive countless times during intermission.

There was no opportunity to speak with OSO conductor Rosemary Thomson or the horn players who had flocked specifically to hear Haydn’s glorious Horn Concerto No 2 in D Major, played mellifluously by Louis-Philippe Marsolais, but judging by their faces after the show, they felt the same way.

The energy of this supremely accomplished ensemble of French Canadian musicians infected the Performing Arts Centre like a fever – a fever that acted as a tonic. Music coursed through every vein, from stage to auditorium. There were even enthusiastic bouts of applause between movements from some who were too carried away to check their program notes.

Conductor Mathieu Lussier’s body language was reminiscent of that of a Martha Graham trained dancer. He was engaged in music-making from the top of his head to the tip of his toes, and the orchestra responded as one body.   We could well have been witnessing a ballet. The atmosphere was electric.

The program opened with Haydn’s Horn Concerto. Although this piece was originally written for “natural horn” virtuosos, Marsolais played it on the more modern French horn, which, incidentally, originated in Germany and is not to be confused with the English horn, which is French (loosely quoting the hilarious soprano Anna Russell).

When asked why he didn’t play his baroque horn, Monsieur Marsolais said it was too difficult and dangerous to transport two precious, cumbersome instruments on the company’s current exhaustive tour of Western Canada.

No matter. The notes he produced flowed like chocolate from a fountain and captivated the audience entirely. They say a horn player needs a five-litre lung capacity.  Marsolais’s might well have exceeded that!

He also charmed the audience with a second appearance in Schumann’s Adagio and Allegro, Opus 70, which he orchestrated.

Then there was Felix Mendelssohn’s String Symphony No 10 in B Minor. The child prodigy wrote it in May, 1823 when he was 14 and performed its premiere with a string quintet at his parents’ opulent Berlin home.

The energy and precision with which Les Violons du Roy interpreted their arrangement of its only surviving movement, which  begins mournfully, continues with a recurring theme and ends in a vibrant climax, wrought spontaneous applause and added to the wonder that a 14 year old could achieve such a degree of excellence.

Franz Schubert’s String Quartet No 14 in D Minor, known as Death and the Maiden, brought the concert to a rapturous close. Violin soloist Pascale Giguere particularly shone, as did leading players on second violin, viola and cello. Arranged by Lussier, who recently took over the reins from ensemble founder and former director Bernard Labadie while he battles ill health, was a coup de gras.

A standing ovation was rewarded by J.S. Bach’s Air on G String, which evoked sighs of recognition from the packed rows of happy music lovers.

Those unfortunate enough to miss the concert might console themselves with one of the 29 CDs made by this fantastic chamber orchestra from Montreal.

– Reproduced by kind permission of Christine Pilgrim and The Vernon Morning Star.