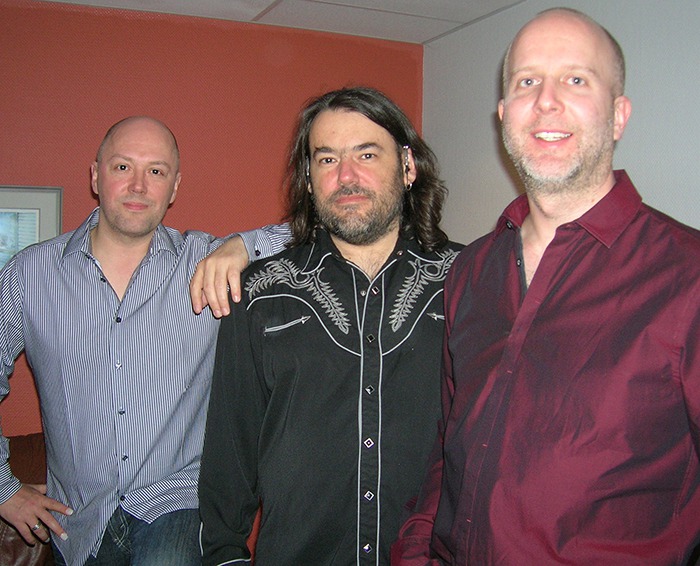 The sum of their 30 fingers plucking, strumming, drumming and stroking their guitars, created by luthier Bruno Boutin, amounted to a triumphant close of the North Okanagan Community Concert Association’s diamond jubilee déjà vu series. Their individual names are Sébastien Dufour, Marc Morin and Glenn Lévesque, but they play as one … all for one; one for all!

I confess to a bias in favour of anyone who hails from Montréal. So the mere name, Montréal Guitare Trio (MG3), would swathe these musicians in accolades whether they were brilliant or not.

But brilliant they were; and Friday’s two-hour performance flew as fast as their fingers over the strings and frets. They had the audience on friendly first name terms as soon as they’d ended their perfectly synchronised opening arrangement of Ennio Morricone’s El Paso.

The atmosphere was jovial and the pace upbeat, even when Sébastien (Séb) took time out to untangle Glenn’s mandolin strap from the lead of his new ear pieces which replace regular feedback monitors.

MG3 learned of them from the California Guitar Trio on their recent tour together. These devices, along with touring microphones and their “fourth musketeer,” technician Ian Vadnais, meant that the sound, also enhanced by the Performing Arts Centre’s new system, was superb.

The packed house, apparently NOCCA’s biggest and certainly its broadest for some time, bears witness to MG3’s popularity. Audience and performers fed on each other’s energy and enjoyment until the feast ended in the trio’s spectacular encore arrangement of Morricone’s The Good, the Bad and the Ugly – with Marc on accordion traditionnel, Séb on charango and Glenn on guitar while whistling without moving his lips as everyone followed the passage of an imaginary fly.

The program was perfectly balanced and the program notes provided an amusing opportunity to scan the play list for the running order and find who had written and arranged each item. All three musicians trained in classical music at the Université de Montréal and are as adept at composing and arranging as at performing. Meanwhile, their spontaneous wit knitted the program into an eclectic whole.

Their exquisite new arrangement of George Harrison’s While My Guitar Gently Weeps and their moving tribute to their late friend Nick Naffin, in a lyrical, full-bodied arrangement of his Le Renard, contrasted their passionate, flamboyant flamenco treatment of Luiz Bonfá’s Manha de Carnaval.

Original compositions by Lévesque and Dufour also graced the bill, most dramatically with Breizh Tango and Garam Marsala respectively. In the former, the raw earthiness of Brittany’s gypsies was visceral, as was the sense of the heat, the colours, and taste of the spices of India in the latter; especially when Séb flipped his guitar, laid it horizontally on his knees and drummed it like a tabla while Glenn tightened and loosened a tuning peg on his to make it whine like a sitar.

MG3 is not merely a guitar trio; it is an ensemble of first-rate performers.

These three Montréal musketeers communicate through the pores of their skin, with honesty, humour, integrity and energy from the moment they strut on stage to when they march off, tous pour un; un pour tous.

Christine Pilgrim is a freelance writer who reviews the NOCCA season for The Morning Star.

Reproduced with the kind permission of Christine Pilgrim and