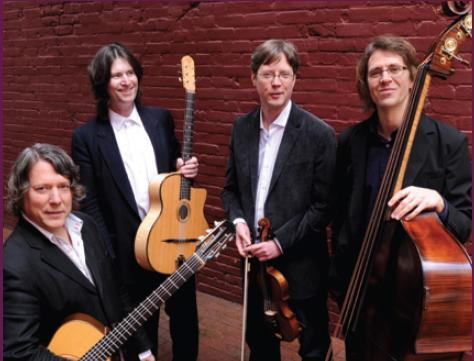 Van Django is an acoustic string ensemble made up of four of Canada’s most talented and eclectic musicians; violinist Cameron Wilson, guitarist Budge Schachte, guitarist/cellist Finn Manniche and bassist Brent Gubbels. Their music is punchy, driving and rhythmically inventive, combining a wealth of musical influences while maintaining their roots in the gypsy jazz made famous by the 1930’s Quintet of the Hot Club of France.

They were such a hit in NOCCA’s 2007 season, last year’s audience survey securely placed them on the “back by popular demand” list. While versatility and variety makes  them stand out from their European counterparts, they still cling to their gypsy jazz roots – music inspired by Django Reinhardt and Stephane Grappelli. They are regulars at Canadian jazz festivals, and have also accompanied the Quiring Chamber Players, been guests of the Electra Women’s Choir, and appeared with the Vancouver Bach Choir. www.vandjango.com