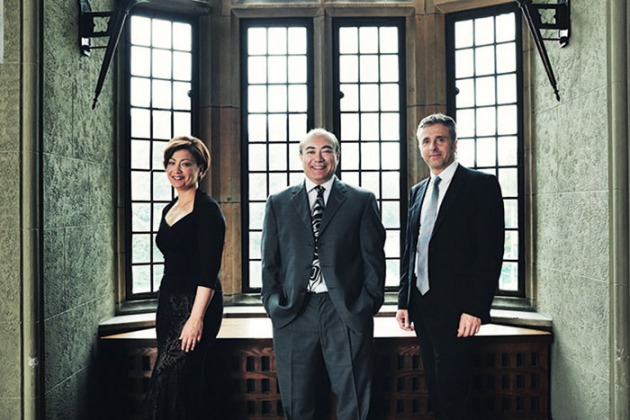 As a child, Brenda Dewonck would be tucked in her bed upstairs, when suddenly the music from her parents’ living room would wake her from a light slumber.

Sometimes she wouldn’t sleep at all, lying there raptured by an arpeggio on the piano or a tremolo of the violin, knowing some famed musician from an exotic corner of the world was seated in her home, performing to the gathered guests.

Back in those days, Dewonck’s family home was host to a who’s who of well-known professional artists who had came to Vernon to perform for the North Okanagan Community Concert Association.

They were there at the invitation of her  parents, Walter and Josephine Karen, both professional musicians themselves who helped start and sat on the original board of the NOCCA 60 years ago.

“We had a lot of receptions at the house. As children we would be sent to bed, but I had an autograph book that I would get mom to give to the artists to sign for me,” remembers Dewonck. “We also had a lot of performers practise here over the years.”

Dewonck, in fact, was born around the time of the very first Community Concert, Oct. 27, 1953, where the association played host to Cuban pianist Jorge Bolet.

Dewonck’s mother, known to all as “Joey,” still lives in the family’s East Hill home (her father has since passed on) and her memories are still tied to all the incredible artists she saw and entertained for all those years.

“She was a joy to be around,” she said. “To have her here as a guest sitting at the table was special. I think the artists appreciated to come into a home rather than stay in some hotel.”

She also remembers the time the Romero Guitar Quartet, known as the The Royal Family of the Guitar, came to perform.

“One of them came back to the house to perform. At the reception he sat down, alone, and he didn’t speak the whole time. I think he was shy, but when he played, that was a different story.”

It was in June, 1953, when the Karens along with Tom McMurtry (the first president of the NOCCA), Jack Kidston, Josephine Goad and other like-minded citizens instigated bringing a community concert association to Vernon.

“We were either classical musicians or lovers of classical music,” said Joey, a pianist and instructor, who at one time had played stand-up bass with the Okanagan Symphony and was the orchestra’s first soloist, playing Rhapsody in Blue on piano. “We wanted to give our small town a series of good music each year.”

The group soon made contact with Inga Williams, representative of Community Concerts Inc. in New York, who came to Vernon and helped set up the idea to sell memberships for a full series of concerts as to keep the costs for each individual show at a minimum.

The newly formed North Okanagan Community Concert Association, so called to distinguish the group from Kelowna which would set up its own community concert association a few years later, saw six concerts for $6 that first year.

“We had a number of people who were willing to work on getting memberships,” said Joey. “Each had a list of 10 people to contact… We had a celebration dinner to start the whole thing up, and held a contest on who could get the most members.”

The successful drive led to 1,350 members signing up that first year. And it was that many people who crowded into the gymnasium at Vernon High School, located where the fountain now sits in Polson Park, to see Bolet perform.

“At that time eight per cent of the North Okanagan was a member of the NOCCA. We were starving for culture then,” said Joey.

Although unable to attend that first concert as she was in labour, Joey says subsequent concerts saw the school gym packed solid.

“The artists had to use a classroom as a changing room.”

That first year the association also had to rent a piano from the Vernon Business and Professional Men’s Club.

“It was not up to performing properly…  Bolet ended up bringing his own piano, which he pulled behind his car on a trailer,” said Joey.

The following year, the NOCCA formed a committee to purchase its own piano. They heard about an 1887 nine-foot Steinway grand, originally built in New York, that had recently been reconditioned and bought by the Steinway factory in Hamburg, Germany. The association arranged to have the piano shipped to B.C.

Piano restorer Marinus van Prattenburg of Peachland rebuilt the piano in 2003 to save the association from spending $150,000 for a new one.

With 60 years of history behind it, the NOCCA has seen many changes —its home moved from Vernon High School to the Vernon Recreation Centre to its current home in the Performing Arts Centre 13 years ago— to holding from six, to four, to the current five concerts a year.

And of course there’s the artists. Literally hundreds of musicians have played either on the Steinway’s keys, from Fou T’son from China, Gusto Romero from Mexico, and Austrian-born Canadian Anton Kuerti, to performers using up the acoustics such as The Vienna Academy Chorus, American baritone Igor Gorin, the Robert DeCormier Singers, and Manhattan Rhythm Kings, as well as many acclaimed Canadian artists from Jorgen Ballet to tenor Ben Heppner to the Gryphon Trio.

“We also encouraged young people to perform, and for two years in a row we offered an extra concert featuring young, local talent,” said Joey, adding two of those artists were mezzo soprano Lynne McMurtry, who would go off to start a successful career in Toronto, and tenor Paul Moore, who has performed internationally.

“Looking back at 60 years, I am astonished at the performers who have come here,” said Dewonck, who has the autograph book to prove it and is currently a director-at-large with the association.

However, it’s not just the musicians who have helped the NOCCA succeed into its diamond jubilee. Current president Paul Maynes attributes the longevity of the group to the utmost dedication of the people who have volunteered their time over those years.

“They are people like Joey, and those who have supported us by buying tickets,” he said. “It really still is the most affordable entertainment in town.”

As for Joey, who after 60 years has finally stepped down from the NOCCA board, where she served as president several times and was also on the music selection chair, she plans to continue enjoying the music as long as she can.

The NOCCA is celebrating its 60th anniversary with an exciting season of five concerts. The first one kicks off with the return of the Gryphon Trio, who last played in Vernon 10 years ago, Oct. 26 at a red carpet gala affair.

“This year, our season has been selected by our subscribers by popular request,” said Maynes, adding the Reside Dawson Duo, pianist Ian Parker, jazz artists Van Django, and the Montreal Guitar Trio will also all be returning to perform.

Memberships for all five shows are now available at a cost of $100 for adults and half price for those 18 and under. Single tickets for each concert are also available. They can be purchased at the Ticket Seller box office, call 549-SHOW (7469) or visit http://www.ticketseller.ca.

Reproduced with the kind permission of Kristin Froneman and